LEAD REIN PONY
A LEAD rein pony must have a good walk always with a correct four time beat.  They should not be over-bent and will have a steady head carriage but, at the same time, have a quality and presence that says “look at me!”

Leaders should be positioned at the shoulder, neither dragging nor holding the pony back and there should be a reasonable length to the lead rein.  The correct hand to hold the lead rein in is the outside hand, so that the inner hand may be used in an emergency situation to help the young rider.
The transitions in a lead rein pony should be smooth and the trot not overly extravagant.  Again attention should be paid to make sure the outline of the pony is soft and supple, showing no tension or resentment.
As with all show animals the conformation should be correct.  Attention should be paid to the lead rein pony, making sure it is not overwide (stretching little rider’s legs).  Overweight ponies may be penalized.

The general format of the class is that they enter the ring at walk and then will be asked to trot one at a time past the judge and halt.  Once called into line the ponies will stand before the judge and then be asked to walk away from the judge in a straight line, then trot back towards the judge to assess conformation and straightness of movement.

The lead rein pony is not “stripped”.  The short individual show (the composition of which can be left up to the exhibitor) will often include a trot and figure of eight and should always finish with a halt in front of the judge.  Occasionally a judge will give a set show.

FIRST RIDDEN PONY
FIRST Ridden ponies should have more scope and size to them than the lead rein and have the perfect manners that make them suitable for a safe transition for the rider to go off the lead.  The overall picture should be one of pony and rider going freely and willingly forward in a confident and relaxed manner.  The trot should have rhythm. 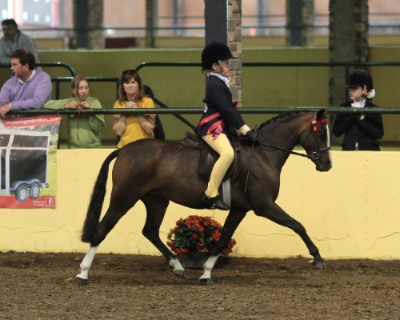 In the initial few minutes, the ponies walk and trot as a class and sometimes change the rein.  After the ponies have been called into line they will be asked to give an individual show, which would ideally include a walk, trot and canter on both reins, finishing with a halt.

In a first ridden class the ponies may be expected to strip, (take the saddles off) and the children asked to stand the pony in front of the judge who will assess its conformation. They will then be asked to walk away and trot directly back towards the judge.  This is a phase of the class that is sometimes not practiced enough, leaving a poor impression.  Once the class is completed the ponies leave the ring, again in trot only.

SHOW PONY
Different judges will look for different things in a show pony but the first and most important thing is type.  A show pony transported into a class of hunter ponies with their more workmanlike appearance, substance and limb combined with strong, straight movement designed to cope with heavy going, would look totally out of place. 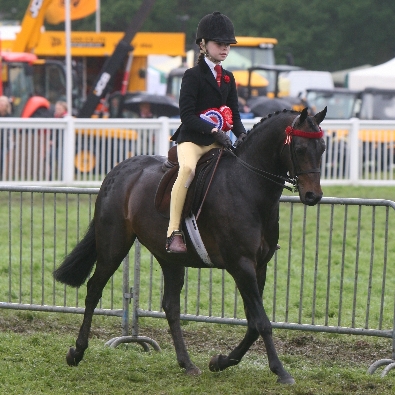 The show pony is elegant, graceful and full of quality, yet still possessing adequate bone.  A ‘ beautiful front ‘ is a pre-requisite and when stripped, a lovely topline is always a plus.  Limbs should, as in any showing class, be clean but in recent years, windgalls, thoroughpins and splints are more common, sadly, than they used to be.  Action must be straight and true.
What really sets the show pony apart is its way of going.  They must move and have that special something.  Movement and presence are vital as no matter how good the pony looks standing still, without these qualities, it will never win.

Movement should be effortless and never rushed and once the show has finished, ponies should be able to stand for a count of three or so for a final salute.
A good judge weighs everything up and if the more correct, more beautiful show pony performed well enough, then it should win the day.

INTERMEDIATE SHOW RIDING TYPE
Judges of intermediate show riding types expect animals of quality which have elegance and presence.  Like the show pony, they need to move and have presence.
When in a championship with their show hunter type rivals, the difference should be obvious, not only in terms of substance and bone, but also in their way of going.
Action must be long and low, with good cadence and the overall impression must be one of balance and rhythm. Ideally a beautiful head with a bold eye would complement an impressive front with a decent length of rein, sloping shoulder and good depth.
A strong forearm on a clean limb and a good hind leg should also be present.
A great deal is owed to these classes.  Without them, many people would have given up showing altogether when they found that the horse classes were a different ball game to the ponies.  Young adults can now enjoy a few more years of less pressurised competition before taking on the established show horse scene.