Section A: The Welsh Mountain Pony

Bred in the mountains and wild regions of Wales for many generations, their acknowledged beauty does not mean they are merely a ‘pretty toy’ — centuries of ‘survival of the fittest’ has ensured the sound constitution, iron hard limbs and great intelligence which combined with the legendary Welsh temperament, makes the ideal child’s pony of today.  They can be seen ridden and driven all over the world — equally at home in the cold of Canada and Sweden or the heat of Africa and Australia. 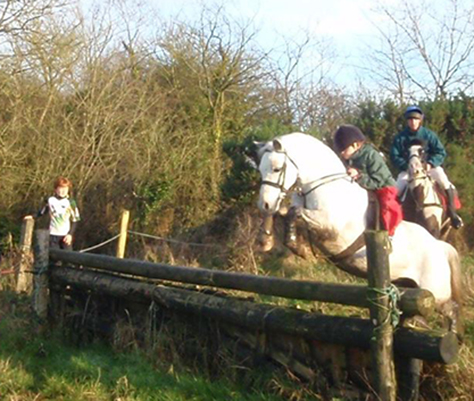 The head of the Mountain Pony should be small, with neat pointed ears, big bold eyes and a wide forehead.  The jaw should be clean cut, tapering to a small muzzle; the silhouette may be concave or ‘dished’ but never convex or too straight.  The neck should be of good length and well carried with shoulders sloping back to a clearly defined wither.  The limbs must be set square with good flat bone and round dense hooves.  The tail set high and gaily carried.

Action must be quick, free and straight from the shoulder, knees and hocks well flexed with straight and powerful leverage well under the body.

Section B: The Welsh Pony

The general description of the Welsh Mountain Pony can be applied to the Welsh Pony, with greater emphasis being placed on riding pony qualities whilst retaining the true Welsh quality with substance. 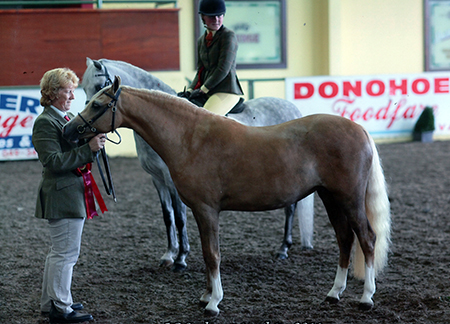 For generations these ponies were the hill farmers’ main means of transport, herding sheep and wild ponies over rough and mountainous country.  They had to be hardy, balanced and fast to survive, which ensured that only the best were bred from.  These qualities, combined with a natural jumping ability, and the temperament of their Welsh Mountain Pony forebears make the Welsh Pony second to none in whatever field his young rider may choose.  Today they hold their own among our top class riding ponies both in performance competitions and in the show ring.

The Welsh Pony of Cob Type, Section C, is the stronger counterpart of the Welsh Pony, but with Cob blood.
Their true worth as a dual purpose animal has been fully realised in recent years and their numbers have increased accordingly.
Active, surefooted and hardy, they are ideal for so many purposes both for adults and children.
Like all the Welsh Breeds they are natural jumpers and they also excel in harness — there are, in fact, few things that they cannot be used for.
The height should not exceed 13.2 h.h. (137.2cms).

Aptly described as “the best ride and drive animal in the World”, the Welsh Cob has been evolved throughout many centuries for his courage, tractability and powers of endurance.

The general character is the embodiment of strength, hardiness and agility.  The head shows great quality with Pony character: bold prominent eyes, a broad forehead and neat, well-set ears.  The body must be deep, on strong limbs with good “hard wearing” joints and an abundance of flat bone.  Action must be straight, free and forceful, the knees should be bent and then the whole foreleg extended from the shoulders as far as possible in all paces, with the hocks well flexed, producing powerful leverage.

The Welsh Cob is a good hunter and a most competent performer in all competitive sports. In recent years they have had great success in the international driving world.  Their abilities in all spheres are now fully recognised throughout the world.

Welsh Pony blood is eagerly sought for outcrossing with Arabs, Thoroughbreds, Hackneys and Polo Ponies.  To these established breeds, the infusion of the Welsh blood has given the resultant offspring stamina, a strong constitution, superb bone, courage and the ability to tackle any task. 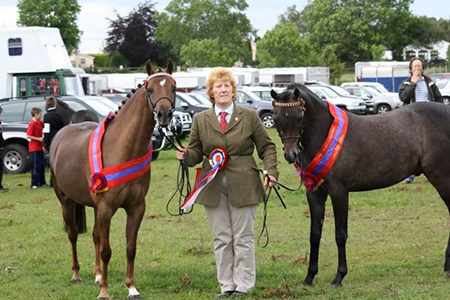 Part-Bred Welsh Ponies Lambay For Fun and Lambay All Inclusive

The Welsh Pony is blessed with a superb temperament and acknowledged as the most beautiful and aristocratic of all native ponies.  It provides the greatest pony outcross that the equestrian world has known.  It is, therefore, little wonder that the Welsh Part-Bred Pony has achieved so much in the pony world.

Welsh Part-Breds have a minimum of 12.5% registered Welsh blood in their parentage, which can come from the sire, the dam, or both.  For example, it can come from crossing two ponies which each have 12.5% Welsh blood, or from any other combination which ensures the 12.5% minimum is met.  Welsh Part-Breds have no restriction on colour, unlike Pure-Bred Welsh Ponies and Cobs, where piebalds and skewbalds are debarred.

You never outgrow a Welsh Part-Bred Pony for pleasure, fun and competition!