The Dales Pony is a native of the upper dales of the eastern slopes of the Pennine range, from the High Peak in Derbyshire to the Cheviot Hills near the Scottish Border, where a lead mining industry flourished from Roman times until the mid-19th century. The favoured breeding grounds have always been the upper dales of the rivers Tyne, Wear, Allen, Tees and Swale.

Dales ponies were bred for a specific job in a harsh environment. When the job changed, they were successfully adapted for other uses, and today the ponies can demonstrate all the qualities and abilities which brought their forebears such renown. The combination of strength, agility, thrift, hardiness and high courage, with good conformation and a calm, intelligent nature, makes the Dales Pony a first-class riding and driving pony with all the abilities of a true all-rounder.

These very hardy ponies are ideally between 14hh and 14.2hh in height. Colours are predominantly black, with some brown, bay grey and, rarely, roan. White markings are allowed as a star and/or a snip, and white to the hind fetlocks, and ponies displaying more white than this are down graded to Section B.

Dales ponies are renowned for the quality of their hard, well-shaped feet and legs, which should display beautiful dense, flat bone. Their action is straight, high and true. They are good movers, really using their knees and hocks for powerful drive. They have tremendous stamina, an iron constitution, high courage and great intelligence, combined with a calm temperament. 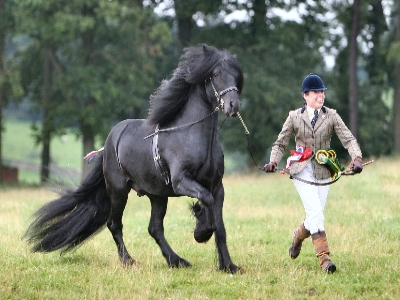 The Dales Pony uses his knees and hocks for a powerful drive (Photo: A. & J. Equine Photography)

The head should be neat, showing no dish, and broad between the eyes. The muzzle is relatively small, no coarseness about the jaw and throat, and incurving pony ears. A long foretop, main and tail of straight, silky hair, and a muscular neck of ample length for a bold outlook should be set into well-laid, sloping shoulders. Withers not too fine.

Stallions carry a well-arched crest. The body should be short-coupled, with strong loins and well-sprung ribs. Short, well- developed forearms are set into a broad chest. Quarters are lengthy and powerful, with very muscular second thighs above clean, broad, flat hocks, well let down. The cannons should display an average of 8” to 9” of flat, flinty bone with well-developed tendons. The pasterns should be of good length, with very flexible joints; the hooves large, round and open at the heels with well-developed frogs, and with ample straight, silky feather.