This category includes piebald (black and white) or skewbald which includes bay/white, chesnut /white, brown/white, roan/white and variations of these.  Belly spots only are not accepted, nor are appaloosa ponies.  Some blue roan/white animals may fade with age and appear grey except when wet, when the different skin tones can be seen.

Some of today’s coloureds will have recorded parentage on one side, if not both, but since the demise of the ‘creamery pony’, which usually had thoroughbred or Welsh blood not too far back, there is a lack of the small quality coloured mare from which one could attempt to breed show quality animals.  Up to about 40 years ago there were two distinct types of horses and ponies bred by the travelling community.  The first was the ‘vanner’ or ‘traditional’, a heavy type with plenty of hair, much as those seen today, but up to about 163cms.  These were used to draw the caravans and were predominately white with black or bay patches and were both docile and hardy.  The origin of the breed is unknown, but would make a fascinating study for someone.  The second type was the pony used to drive under the flat carts and was in no way to be compared with the coloured trotter of today.  They were clean legged, good moving, well-built ponies of about 143-153cms with some white patches but predominately bay, which was probably the influence of thoroughbred breeding in their lineage.  They were quite hot and showed a good bit of quality, but sadly since the motorisation of most travellers this type is now very rarely seen and would make wonderful foundation stock if they could be found.

Several of the semi-wild Kiltinane ponies by All Springs were coloured, mostly bay roan and white, they were descended from Welsh Mountain ponies crossed with Arabian and polo pony stallions with the odd coloured colt getting in by mistake!  It is a step forward that we now have a ridden coloured category within the IPS, and hopefully that will shortly expand to include a section for Mini ponies and for Working Hunters. As one of the countries of origin of the coloured pony, we are now way behind in the purpose breeding of these, partly due to the stigma that ‘colour means common’.  We would probably have to look to the UK for foundation stock, where the coloured animal both quality and traditional is highly popular. 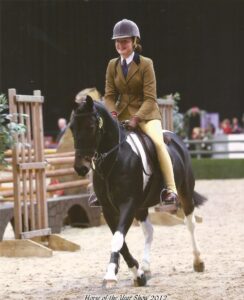 A TOUCH OF MAGIC
A 143cms Working Hunter of unknown breeding, but a lovely pony with smart markings, a good head and eye and great action. A type very hard to find with both quality and ability. 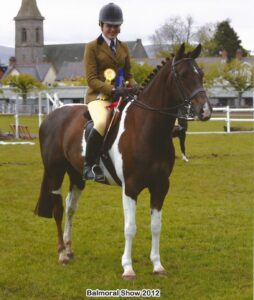 PAINTBALL
Another versatile pony with attractive markings and clean limbs. Although his breeding is not recorded he is believed to be by Crosstown Spurs.

WATERGLADES GEMINI
This well marked 143cms Show Hunter has interesting breeding, being out of a Welsh Section B mare by the show jumping coloured stallion Village Lad that unfortunately met an untimely death before the process could be repeated! Her small head shows her welsh breeding and should she pass on her colour when she retires to stud she would make a great foundation mare for purpose bred coloureds.

KASALA CASANOVA
A 158cms six year old of unknown breeding. His base colour being bay suggests a good bit of thoroughbred as does his clean legs and free action. 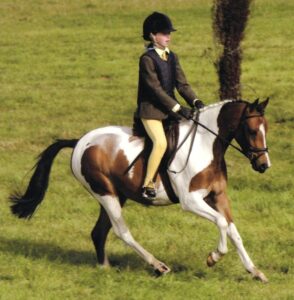 PARCGLAS SPLENDID RAINBOW
An active 128cms by the blue roan Welsh Part-bred stallion Eskdale Splendid Venture out of a small coloured mare of no specific breeding. A well-marked quality pony with a good head and eye and plenty of ability. His sire’s roan colouring can be seen in the upper part of the patch on his quarters and in a small patch under the saddle.

Keep sending pictures and details of your coloured ponies to info@irishponysociety.ie